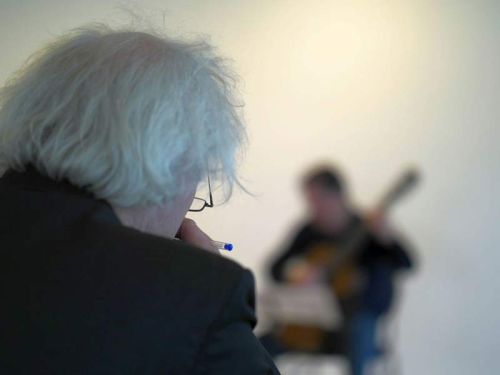 SCHEDULE OF THE COMPETITION

Pieces played in one round cannot be repeated in any other round. The programme must be sent before 15 October 2021, 12.00pm CET to This email address is being protected from spambots. You need JavaScript enabled to view it..

All active and passive Koblenz Guitar Festival participants are entitled to compete, without age limit.

1st Prize:
3.000€, Concert at the 30th Koblenz Guitar Festival & Academy 2022 including a professional live CD and Video production made by Dipl. Tonmeister Moritz Reinisch und Dipl.-Ing. Sebastian Deinhart, German Concert Tour in cooperation with and sponsored by the Koblenz International Guitar Society e.V., five-date concert tour at German conservatories with a fee of 500€ per concert plus travel expenses and accommodation, three concerts in Brazil plus video production including flight, hotel accommodation and a fee of 500€ per concert all in collaboration with GuitarCoop and Cultura Artística São Paulo, 30 sets of Savarez strings, a three-years supply of D'Addario strings (52 sets per year)

§ 1. The Competition is part of the Koblenz International Guitar Festival & Academy.
§ 2. The Competition is held in three rounds the details of which are completely explained on the Festival Website.
§ 3. If the time limit is exceeded, the Head of the Jury may cut off the performance at that point.
§ 4. Pieces played in one round may not be repeated in a later round.
§ 5. There will be a maximum of 20 candidates chosen for the Round 2, and a maximum of 6 candidates chosen for the Final Round.
§ 6. The score will be made in a point system ranging from 0 to 25.
§ 7. The highest and the lowest points of each candidate will be discounted when the points are added together to calculate their score.
§ 8. Where candidates receive an equal score, the score from the previous rounds will serve to distinguish them.
§ 9. The score cannot be approximated or rounded off.
§ 10. The scores will be calculated to only two decimal places.
§ 11. Each jury member must keep their score sheet in the score sheet folder and at the end of each round, must hand over their signed copy to the Head of the Jury.
§ 12. No jury member should give points to their own students.
§ 13. The jury within a particular round cannot be changed.
§ 14. The First Prize may only be awarded for a polished performance of a high artistic standard.
§ 15. The First Prize cannot be shared.
§ 16. Where no First Prize is awarded, the Second Prize can be shared.
§ 17. Where there is no Second Prize awarded, the Third Prize could be shared.
§ 18. Where neither a First nor Second Prize is awarded, the jury may choose to award two Third Prizes.
§ 19. The special prizes will be awarded only for works played in the 2nd round of the competition.
§ 20. All jury members are required to maintain confidentiality; they must be objective and neutral in their judgement. If any jury member should act contrary to this requirement, the Festival Director reserves the right to remove them from the jury.
§ 21. Jury discussions must be mutually respectful, following the guidance of the Head of the Jury.
§ 22. All decisions of the jury must follow the view of the majority.
§ 23. If the number of competitors exceeds 70, then two juries might be established in the First Round. After the 1st round is completed, the Jury President can decide to call an additional intermediate round. A maximum of 10 competitors will be given the opportunity to perform again their programme from the first round for the complete jury. The number of points received in the intermediate round, will be used to judge if competitors proceed to the 2nd round.
§ 24. Only the German version of these rules are binding.
§ 25. The winners agree to perform in the winners' concert.
signed: Prof. Georg Schmitz (Direktor Koblenz Guitar Festival & Academy)